Home / Books / The Collapse of Parenting 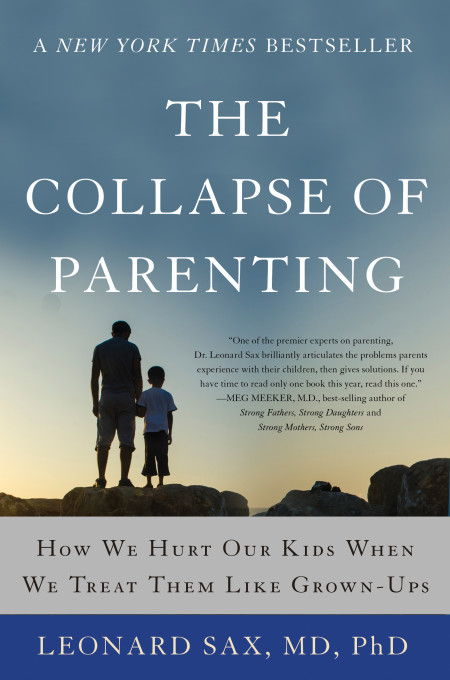 Over the past 30 years, a major shift has occurred in American culture: the transfer of authority from parents to children. Activities with same-age peers now commonly displace family activities. Children today often choose what’s for supper; they choose which social media they will engage; they often choose their bedtime and sometimes even their school. In the book, I show how these factors and related influences have led to children and teenagers being less resilient, less physically fit, and more likely to become anxious or depressed – and far more fragile – compared with kids from the same demographic 30 years ago.

Some aspects of this collapse of parenting are just as problematic in England and Australia as they are here. In every country I have visited, I have found parents who are unsure about their role. They ask: “Should I be my child’s most trusted confidante? My child’s best friend? But if I am my son’s best friend, how can I tell him that he is not allowed to play violent video games?”

But some challenges are uniquely, or primarily, American. They are:

What happened? Why did it happen? And what do you need to know, if you are raising a girl or boy in the United States today? Those are the questions I answer in this book.

In the book I tie all these issues together: the declining physical fitness of American kids; the explosion in the prescribing of psychiatric medications for children and teenagers in this country; the rapid decline in academic achievement of American students relative to students in other countries; and the growing fragility of American youth.

Chapter 2: The Culture of Disrespect

Chapter 3: Why are so many American kids on medication?

Chapter 4: Why are so many American kids overweight?

Chapter 5: American kids used to be among the world’s best students. Not anymore. How come?

Chapter 6: Why are so many American kids so fragile?

Chapter 11: The Third Thing – The Meaning of Life

What qualifies me to write this book?

I am a family physician, board-certified in family medicine, currently in practice in suburban Philadelphia. I also have a PhD in psychology. I earned my undergraduate degree in biology at MIT. I earned both my MD and my PhD at the University of Pennsylvania. After doing a three-year residency in family medicine, I practiced for 19 years in the Maryland suburbs of Washington DC. I then relocated to Chester County Pennsylvania. My primary sources for this book are the more than 90,000 office visits I have conducted in my role as a practicing physician between 1989 and today. I have seen children, teenagers, and their parents, from a wide variety of backgrounds and circumstances. I have seen, from the intimate yet objective perspective of the family physician, the profound changes in American life over the past three decades. I have witnessed first-hand the collapse of American parenting.

In 2001, I began visiting schools and communities, first just across the United States, and then in Australia, Canada, England, Germany, Italy, Mexico, New Zealand, Scotland, Spain, and Switzerland: meeting with teachers and parents, talking with students, listening to professors. From July 2008 through June 2013 I took an extended leave from medical practice in order to devote myself full-time to these visits. I have now visited more than 400 venues across North America and around the world, encountering students, teachers, and/or parents face-to-face. Listening to children and their parents outside of North America has convinced me that we in the United States and Canada now face challenges – of our own making – which are significantly different from the challenges facing parents in Scotland or Switzerland or New Zealand. We American parents are no longer doing a very good job of parenting, despite our large and growing expenditures of time and treasure on the task. I now understand where we have gone wrong, and how to fix it. My prescription is based primarily on what I have seen in the office, but also draws on what I have learned from my conversations with parents, teachers, and kids both within the United States and outside of the United States.